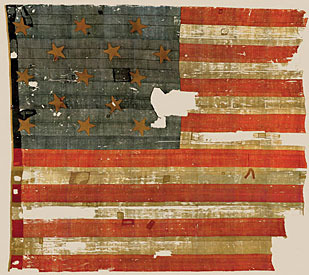 Oh, say can you see by the dawn's early light
What so proudly we hailed at the twilight's last gleaming?
Whose broad stripes and bright stars thru the perilous fight,
O'er the ramparts we watched were so gallantly streaming?
And the rocket's red glare, the bombs bursting in air,
Gave proof through the night that our flag was still there.
Oh, say does that star-spangled banner yet wave
O'er the land of the free and the home of the brave?

EXPLANATION:  The first of the four stanzas of the National Anthem is composed of two questions. In the first question, Key observes that it is early morning after the battle and asks if the flag is visible. With great pride, Key then reports that during last night's battle he saw the flag from behind the walls (ramparts) of Fort McHenry, illuminated by the burning rocket trails and explosions and bomb blasts, and, that it continued to wave in the wind.  To Key, the very fact that the British Fleet kept up its attack and that he could see the flag still flying meant that the American soldiers at the fort had not surrendered or been defeated.  The second question is self explanatory; Key (8 miles away on a truce ship), cannot see the flag and ponders if the fort has fallen. The next stanza provides the reasons why Key was questioning whether or not Fort McHenry had succumbed to the British bombardment.

On the shore, dimly seen through the mists of the deep,
Where the foe's haughty host in dread silence reposes,
What is that which the breeze, o'er the towering steep,
As it fitfully blows, half conceals, half discloses?
Now it catches the gleam of the morning's first beam,
In full glory reflected now shines in the stream:
'Tis the star-spangled banner! Oh long may it wave
O'er the land of the free and the home of the brave!

EXPLANATION:  History records that the weather was drizzly and misty the morning after the battle. Indeed, the weather was worse during the battle as it was storming with heavy winds and rain.  Considering the adverse weather and understanding that the cannons, rockets (1800 were fired), mortars and bombs were all black powder based, and that they make a lot of thick black smoke, it was a wonder Key was able to see much at all.  As an observer, he was lucky that the rain and high winds thinned the heavy smoke from time to time so he could see the fort when explosion blasts illuminated it in the darkness.  Remember, too, that the bombardment was continuous and lasted 25 hours - there were constant explosions. When it ceased at 7:30 a.m., there was a deafening silence. Accordingly, Key first tells us in Stanza Two that the bombardment ended, all fell silent, and, that his vision of Fort McHenry was obscured causing him to fear the worst. Key then says the wind thinned the obscurity, that the Sun began to rise and the fort's flag was there - proudly flying-proudly displaying the courage of the fort's defenders.

And where is that band who so vauntingly swore
That the havoc of war and the battle's confusion,
A home and a country should leave us no more!
Their blood has washed out their foul footsteps' pollution.
No refuge could save the hireling and slave
From the terror of flight, or the gloom of the grave:
And the star-spangled banner in triumph doth wave
O'er the land of the free and the home of the brave!

EXPLANATION:  This Stanza begins with Key asking "where are the British now?" Gloating that the enemy is gone, he recites that the British were bloodied and vanquished. Key then announces that the American flag is now flying in celebration of the British defeat signifying that our country is free because of the brave.

Oh! thus be it ever, when freemen shall stand
Between their loved home and the war's desolation!
Blest with victory and peace, may the heav'n rescued land
Praise the Power that hath made and preserved us a nation.
Then conquer we must, when our cause it is just,
And this be our motto: "In God is our trust."
And the star-spangled banner in triumph shall wave
O'er the land of the free and the home of the brave!

EXPLANATION: Key heralds our military for our freedom. Referencing GOD 4 times, he thanks HIM for defeating the British and protecting our nation.  Lastly, Key says that by trusting in GOD that our country's freedoms will persevere because of our soldiers' bravery.

HISTORICAL NOTE:  In 1931, Congress made the Star Spangled Banner our National Anthem. 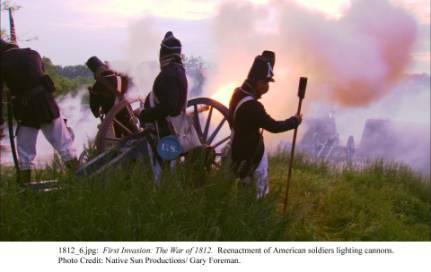